The edible oil refineries have increased in the last few years, with a corresponding increase in oil production. As a result, edible oil containing wastewaters (EOCW) are being produced in huge quantities. Conventional technologies are inefficient in treating these wastewaters due to the highly hydrophobic nature of the lipids

Industry manufacturing refined edible oil generate wastewaters and solid wastes (viz. spent earth, chemical and biological sludge). The wastewater streams were mainly from vat house after soap splitting, floor washing, cooling tower, boiler and filter press. The chemical composition of the wastewater from cooling tower and boiler sections and solid wastes indicates that these wastes could be recycled and reused in the process after preliminary treatment. The combined wastewater from other streams is being treated in the existing effluent treatment plant (ETP) and the treated effluent in not always conforming to the limits prescribed for discharge into inland surface water as stipulated by Central Pollution Control Board, Government of India.

Refining crude vegetable oils generates large amounts of wastewater. In the edible oil industry, wastewaters mainly come from the degumming, deacidification and deodorization and neutralization steps. In the neutralization step, sodium salts of free fatty acid (soap stocks) are produced whose splitting through the use of H2SO4 generates highly acidic and oily wastewaters. Its characteristics depend largely on the type of oil processed and on the process implemented that are high in COD, oil and grease, sulphate and phosphate content, resulting in both high inorganic as well as organic loading of the relevant wastewater treatment works.

Major wastewater sources and processes are defined and described. Refinery wash water from the oil water wash centrifuges was found to be the major contributor of BOD5 and fat, with barometric cooling tower blow down and water from acidulation contributing smaller amounts to the load.
Cooling Tower – Oil Water Separation: It has been observed that due to vacuum process most of Veg Oil refineries cooling tower water contains very significant to large quantity of oil in its cooling tower water. This water has become main cause of the extra burden on cooling tower maintenance and cooling tower not working to its full efficiency as the oil film and oil content reduces the heat transfer as well as quality of water. This also increases the water load and the load on the ETP.

With the help of WyunaSep Oil recovery system and ETP-Pretreatment system. 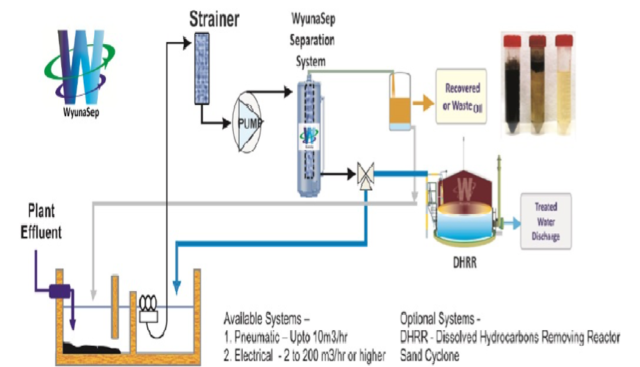 Water Matrix is always ready to help you in keeping your plant compliant in any situation. For inquiry, mail us at [email protected] | Call us at: +9716557 1647

We, Water Matrix Technologies FZE have pleasure in introducing us, as a team of environmental engineers specializing in supplying of WATER & WASTEWATER Equipment for the region of Middle East.